OCTANITE is produced in England since many decades as a fuel catalyst and made in the form of "pellets" by a tin based amalgam of specific metals whose formula is a trade secret. It behaves as permanent octane booster, fuel stabilizer, combustion enhancer and cleaner of carbon deposits in the combustion chamber of internal combustion engines.

When the fuel flows through OCTANITE catalyst instantly occurs an electrochemical reaction: by transporting the active substance into the combustion chamber where it develops its action, improves reaction times and bursting and makes more complete combustion, thus contributing to a greater efficiency of the engine leaving it without carbonic deposits. OCTANITE is a permanent fuel treatment device that works to make the world a better place.

The catalyst is available in two versions:

1) Metal pellets to be inserted directly into the tank

One OCTANITE catalyst is all you need.

It is maintenance-free and you do not need to change anything. 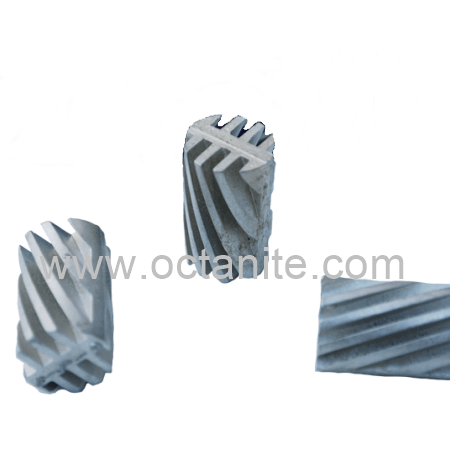 Catalysis (/kəˈtælᵻsᵻs/) is the increase in the rate of a chemical reaction due to the participation of an additional substance called a catalyst (/ˈkætəlᵻst/). With a catalyst, reactions occur faster because they require less activation energy. Furthermore since they are not consumed in the catalyzed reaction, catalysts can continue to act repeatedly. 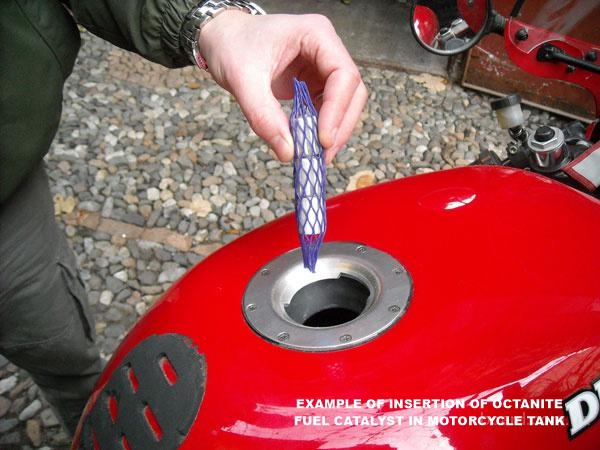 In 1941 during World War II the R.A.F. (Royal Air Force) developed in Russia a first version of this technology so that the Hurricane planes could use low-octane fuel instead of a high octane. Since then, further developments have followed and OCTANITE closely follows the original recipe of the Royal Air Force in the production of this incredible ecological fuel catalyst appreciated by millions of users worldwide. To avoid disclosing its composition, the product has never been patented.

OCTANITE removes and prevents the accumulation of additional carbonaceous substances, gums and waxes. Internally, the engine will be much cleaner and more efficient. It is particularly effective for the needles of the injectors, nozzles, valves, piston rings and oil contamination.

After the first 2,500 km of use of OCTANITE, the oil in the engine can become particularly dirty as it removes the carbon deposits from the engine.

All you have to do is change the engine oil and, subsequently, it is expected to remain significantly cleaner for a longer period. By keeping the engine clean, OCTANITE optimizes the compression and seals the combustion chambers from the crankcase, preventing the contamination of engine oil.

How does OCTANITE get the fuel savings?

OCTANITE catalyst induces chemical reactions between the fuel molecules at low temperatures (as is usual in the tanks of our vehicles) and returns them to their original state. At the end of the reaction, and due to the immediate catalytic effect, OCTANITE enables to obtain a better atomization of the hydrocarbon molecules to a better combustion.

In other words, OCTANITE catalyst allows to reach a higher percentage of fuel molecules with the minimum of energy required for the reaction; thus leading to having more product to be used in the combustion. The catalyst involved in the reaction is regenerated at the end of the reaction so that none of the catalyst is consumed.

The fuel molecules have a tendency to cluster. At the point of combustion, the outer molecules protect internal molecules depriving them of the oxygen they need, with the consequence that some of the internal molecules are not burned but are still emitted out through the exhaust.

When the fuel come in contact with OCTANITE catalyst, just before the combustion takes place a reaction separates the clustered molecules, so that they can be exposed as much as possible to oxygen at the time of combustion. In OCTANITE this phenomenon is even more accentuated than in similar products of the competition, thanks to the particular shape of the pellets, which are produced with numerous grooves within the same structure so to benefit as much fuel as possible of the catalyzing effect .

A simple comparison would be putting a piece of coal in an oven for 30 seconds. The result: the oxygen only surrounds the outer part of the coal by allowing only this to burn. The oxygen does not reach the core of the coal as it protected by the outer layer. If, however, the coal is crushed and reduced to powder, a greater percentage of carbon is exposed to oxygen and therefore resulting in more burned coal.

This is what happens when the fuel comes in contact with OCTANITE catalyst. The clustered fuel molecules are separated so that oxygen can reach a greater surface of them to the point of combustion. In this way it is used all the fuel which reaches the combustion chamber with the result that more fuel is burned, the more energy is created and less non-burnt fuel is output from the gas exhaust, and then in turn reduces pollution .

The more effective is the combustion, the less fuel is required to get the engine horsepower. A cleaner combustion means a better chemical efficiency and a cleaner engine, resulting in reduced maintenance.